Nurses at Stanford Health Care and Lucile Packard Children’s Hospital are ready to exchange thermometers and scrubs for picket signs in a planned strike starting on April 25. To avoid burnout and to continue to offer care during the chaos of the pandemic, the nurses say they need more staff, better mental health resources, better pay, and more paid time-off. More than ninety percent of the 5,000 nurses who belong to the Committee for Recognition of Nursing Achievement (CRONA) union at the two hospitals voted for the strike.

Rather than cave to their demands, Stanford had another message for them: Be prepared to lose your health care. On April 15, right before the Easter weekend and amid Passover and Ramadan, Stanford Health Care announced that in addition to withholding pay, it would also be suspending health insurance benefits for striking nurses and their families beginning on May 1.

More than 4,500 nurses at Stanford Health Care and Stanford Children’s Health in Northern California voted on Friday to authorize a strike, capping off dozens of negotiating sessions that have stretched on for 13 weeks, including this past week when the healthcare workers completed their jobs without any contract in place. The nurses’ union, the Committee for Recognition of Nursing Achievement (CRONA) said that out of its 5,000 members, 93% voted in favor of going on strike to combat management’s insistence that nurses work with inadequate resources and staff support, all while being forced to pick up extra shifts and having their benefits cut.

The Centre of Indian Trade Unions (CITU), along with the All India Kisan Sabha (AIKS) and All India Agricultural Workers Unions (AIAWU), has given a joint call to observe Wednesday as ‘Kisan-Mazdoor Ekta Diwas’, celebrating the date, January 19, to mark the 40th anniversary of the 1982 all-India one-day general strike. The day holds great significance in the history of the country’s trade union movement, for it marked in 1982, arguably for the first time in independent India, the peasantry and the rural-urban workforce’s coming together in a joint action to protest against the economic policies of the Central government. And, as such, every year, sectoral federations active in coal, steel, insurance and telecom sectors, among others, hold a convention on this day, while demonstrations and rallies are carried out at district levels across the country, in a bid to highlight the importance of the workers-farmers’ alliance.

In a major victory for labor rights, workers at Kellogg’s cereal plants have ended their nearly three-month strike after approving a new contract that provides across-the-board wage increases and enhanced benefits for all. Some 1,400 Kellogg’s workers in Michigan, Nebraska, Pennsylvania and Tennessee have been on strike since October.

One of the most contested issues has been a permanent two-tier system, where workers at Kellogg’s hired after 2015 were paid less than longer-tenured workers. The new five-year agreement with Kellogg’s doesn’t include the two-tier system, gives workers a clear path to full-time employment and provides a significant increase in the pension multiplier.

What we we won was fighting against the alternative work schedule, what the company wanted to introduce. And they wanted to introduce a permanent two-tier wage system. So, we were able to get those things taken off the table, along with some different additional things, like an increase to our cost-of-living allowances for everyone and also for our pension plan. We got a significant increase to our pension plan. So, there was a lot of good things. We didn’t have any takeaways and no concessions, so I would say that, in essence, that we did win.

1,400 Kellogg’s workers who’ve remained on strike for over two months, demanding fair wages and better working conditions. Last week, Kellogg’s said it would start replacing striking workers with permanent hires, after a tentative five-year agreement with the company was rejected by an overwhelming majority of Kellogg’s cereal plant workers. The deal would have provided 3% raises.

Kellogg’s announcement drew backlash from across the country, with many demanding a boycott of Kellogg’s products in solidarity with striking workers.

Workers at plants in Michigan, Nebraska, Pennsylvania, and Tennessee have been on strike since October. They make all of the company’s most popular brands of cereal, including Froot Loops and Frosted Flakes.

we’ve been working seven days, seven days a week, 12, 16 hours a day. And we’re asking the company, you know, if you’re going to work us the same, then you need to pay us the same. And we’re trying to get some relief on that, as far as different things inside our language that allow people to be off, like FMLA and stuff like that, where they’re not trying to circumvent FMLA and making you use up all your vacation and saying that you can’t be off with your family, you can’t take care of a loved one or yourself. So, there’s a lot of different things on the table that we’re trying to fight for as our working conditions. And also we’re fighting, you know, to keep jobs in America. We have job security.

Tens of thousands of nurses, technicians, and other healthcare workers at Kaiser Permanente in Northern California staged a walkout Thursday in sympathy with about 700 engineers who have been on strike for two months, calling on the company to offer the employees a fair contract and, advocates said, demonstrating the power of labor unions and solidarity between workers. About 40,000 workers represented by Service Employees International Union-United Healthcare West (SEIU-UHW), Office and Professional Employees International Union (OPEIU) Local 29, and International Federation of Professional and Technical Engineers (IFPTE) Local 20 will go on strike from 7:00 Thursday morning until 7:00 Friday morning.

Nine-hundred staff at Cabell-Huntington Hospital (CHH) remain on strike three weeks after rejecting a contract that would drastically increase health insurance premiums and lower take-home pay. Licensed practical nurses, maintenance and cleaning staff, lab technicians and others organized under SEIU District 1199 have maintained pickets around the hospital system in downtown Huntington since November 3. The strike is one of two taking place in the city. Only a few miles away, 450 workers at the nickel alloy plant Special Metals continue to picket nearly two months after voting down a concessions contract that would have jacked up health premiums, cut pay and eroded job protections. 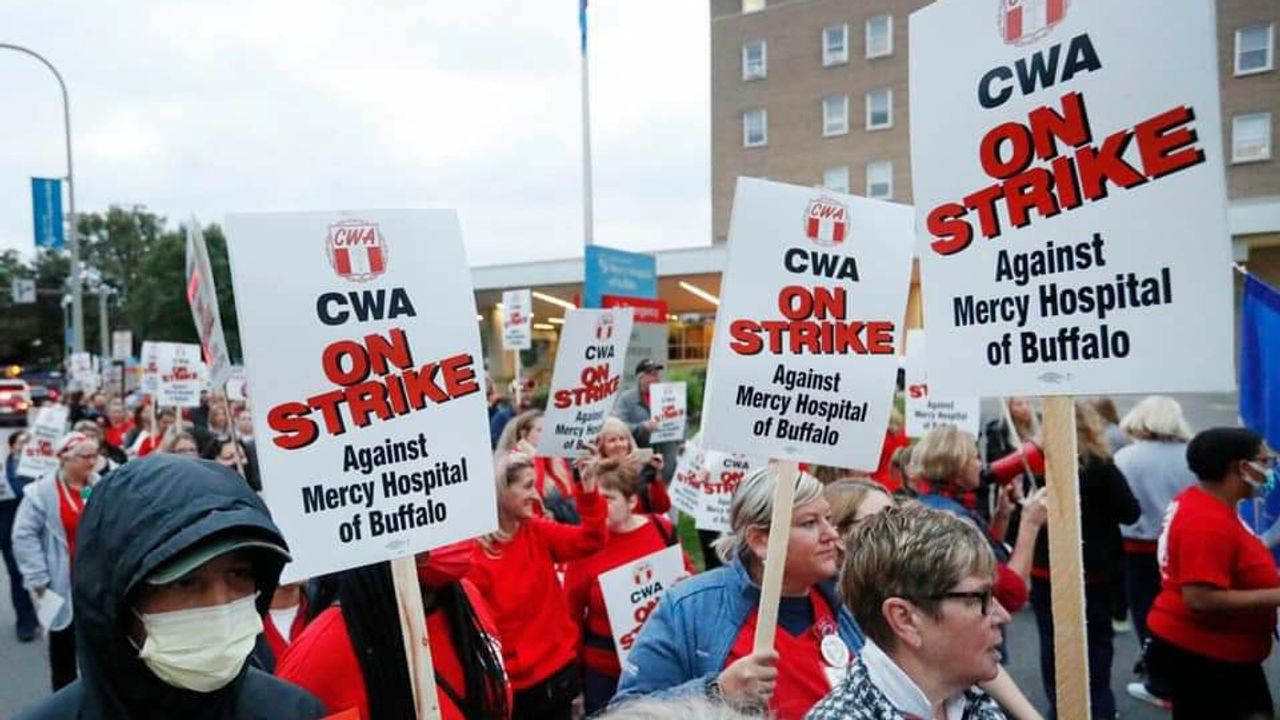 Roughly 2,200 nurses, aides and health care staff walked off the job Friday morning in Buffalo, New York, to fight for better wages, staffing and working conditions at Mercy Hospital of Buffalo. Workers on the picket line describe horrific conditions at the hospital. Patients’ rooms, hallways, cafeterias and even medical equipment are filthy because the hospital refuses to hire enough workers. Catholic Health and the health care workers union, Communications Workers of America (CWA) Local 1133, held negotiations throughout the night on Thursday.

New York City taxi drivers and their supporters celebrated late Wednesday after their two-week hunger strike forced policymakers to reach an agreement offering significant debt relief to thousands of drivers who have been affected by the city’s taxi medallion debt crisis. On the 15th day of the hunger strike outside City Hall, Sen. Chuck Schumer (D-N.Y.) brokered a deal with Mayor Bill de Blasio which will cap the debts owed by taxi drivers at $170,000 and monthly payments at $1,100—a life-changing reduction for drivers who owe an average of about $600,000 in medallion loans.