Researchers from Department of Electrical and Computer Engineering at Texas A&M University have designed an experimental system that shows exposure of SARS-CoV-2 to a very high temperature, even if applied for less than a second, can be sufficient to neutralize the virus so that it can no longer infect another human host. Their process works by heating one section of a stainless-steel tube, through which the coronavirus-containing solution is run, to a high temperature and then cooling the section immediately afterward. if the solution is heated to nearly 72 degrees Celsius for about half a second, it can reduce the virus titer, or quantity of the virus in the solution, by 100,000 times which is sufficient to neutralize the virus and prevent transmission.

[this is in experimental stage. from this, they have to develop equipment that can be usable practically. just putting some heat does not kill virus. scientifically proven equipment or process have to be built based on this finding.]

Astronomers are exploring what might be described as the first astronomical observing tool, potentially used by prehistoric humans 6,000 years ago. They suggest that the long, narrow entrance passages to ancient stone, or ‘megalithic’, tombs may have enhanced what early human cultures could see in the night sky, an effect that could have been interpreted as the ancestors granting special power to the initiated. The project targets how the human eye, without the aid of any telescopic device, can see stars given sky brightness and colour. The team intend to apply these ideas to the case of passage graves, such as the 6,000 year old Seven-Stone Antas in central Portugal. The team present their study at the National Astronomy Meeting, being held this week in Nottingham. 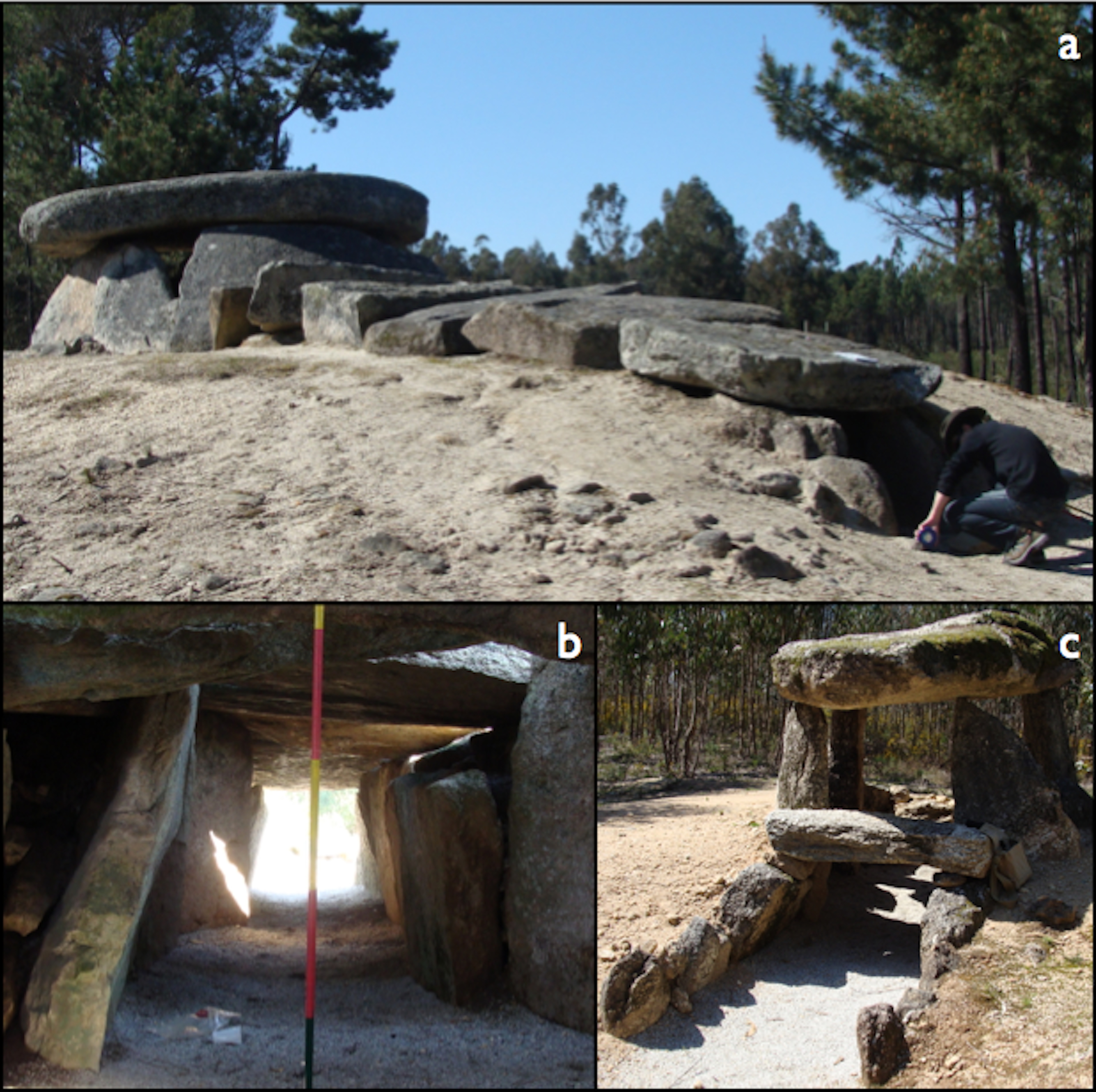 A study done by physicists demonstrates that fundamental characteristics of polymeric molecules, such as their subunit composition, are sufficient to trigger selection processes in a plausible prebiotic setting.

Before life emerged on Earth, many physicochemical processes on our planet were highly chaotic. A plethora of small compounds, and polymers of varying lengths, made up of subunits (such as the bases found in DNA and RNA), were present in every conceivable combination. Before life-like chemical processes could emerge, the level of chaos in these systems had to be reduced. In a new study, LMU physicists led by Dieter Braun show that basic features of simple polymers, together with certain aspects of the prebiotic environment, can give rise to selection processes that reduce disorder.

Around 2.5 billion years ago, our planet experienced what was possibly the greatest change in its history: According to the geological record, molecular oxygen suddenly went from nonexistent to becoming freely available everywhere. Evidence for the “great oxygenation event” (GOE) is clearly visible, for example, in banded iron formations containing oxidized iron. The GOE, of course, is what allowed oxygen-using organisms — respirators — and ultimately ourselves, to evolve. But was it indeed a “great event” in the sense that the change was radical and sudden, or were the organisms alive at the time already using free oxygen, just at lower levels?

Prof. Dan Tawfik of the Weizmann Institute of Science’s Biomolecular Sciences Department explains that the dating of the GOE is indisputable, as is the fact that the molecular oxygen was produced by photosynthetic microorganisms. Chemically speaking, energy taken from light split water into protons (hydrogen ions) and oxygen. The electrons produced in this process were used to form

Evolutionary expert Charles Darwin and others recognized a close evolutionary relationship between humans, chimps and gorillas based on their shared anatomies, raising some big questions: how are humans related to other primates, and exactly how did early humans move around? Research by a Texas A&M University professor may provide some answers.

Thomas Cody Prang, assistant professor of anthropology, and colleagues examined the skeletal remains of Ardipithecus ramidus (“Ardi”), dated to 4.4 million years old and found in Ethiopia. One of Ardi’s hands was exceptionally well-preserved.

The researchers compared the shape of Ardi’s hand to hundreds of other hand specimens representing recent humans, apes and monkeys (measured from bones in museum collections around the world) to make comparisons about the kind of locomotor behavior used by the earliest hominins (fossil human relatives).

Research from the University of Kent’s School of Anthropology and Conservation has discovered that one of the earliest stone tool cultures, known as the Acheulean, likely persisted for tens of thousands of years longer than previously thought.

The Acheulean was estimated to have died out around 200,000 years ago but the new findings suggest it may have persisted for much longer, creating over 100,000 years of overlap with more advanced technologies produced by Neanderthals and early modern humans.

The research team, led by Dr Alastair Key (Kent) alongside Dr David Roberts (Kent) and Dr Ivan Jaric (Biology Centre of the Czech Academy of Sciences), made the discovery whilst studying stone tool records from different regions across the world. Using statistical techniques new to archaeological science, the archaeologists and conservation experts were able to reconstruct the end of the Acheulean period and re-map the archaeological record.

They have an unwarranted image as brutish and uncaring, but new research has revealed just how knowledgeable and effective Neanderthal healthcare was.

The study, by the University of York, reveals that Neanderthal healthcare was uncalculated and highly effective — challenging our notions that they were brutish compared to modern humans.

The researchers argue that the care provided was widespread and should be seen as a “compassionate and knowledgeable response to injury and illness.”

It is well known that Neanderthals sometimes provided care for the injured, but new analysis by the team at York suggest they were genuinely caring of their peers, regardless of the level of illness or injury, rather than helping others out of self-interest.

Lead author, Dr Penny Spikins, senior lecturer in the Archaeology of Human Origin at the University of York, said: “Our findings suggest Neanderthals didn’t think in terms of

In 2012, the quantum physicist John Preskill wrote, “We hope to hasten the day when well controlled quantum systems can perform tasks surpassing what can be done in the classical world.” Less than a decade later, two quantum computing systems have met that mark: Google’s Sycamore, and the University of Science and Technology of China’s Jiǔzhāng. Both solved narrowly designed problems that are, so far as we know, impossible for classical computers to solve quickly. How quickly? How “impossible”? To solve a problem that took Jiǔzhāng 200 seconds, even the fastest supercomputers are estimated to take at least two billion years.

Describing what then may have seemed a far-off goal, Preskill gave it a name: “quantum supremacy.” In a blog post at the time, he explained “I’m not completely happy with this term, and would be glad if readers could suggest something better.”

We’re not happy with it either, and we believe that the physics community should be more careful with its language, for both social and scientific reasons. Even in the abstruse realms of matter and energy, language matters because physics is done by people.

The word supremacy—having “more power, authority or status than anyone else”—is closely linked to “white supremacy.” This isn’t supposition; it’s fact. The Corpus of

With a high concentration of cave sites harbouring evidence of past populations and their behaviour, the Levant is a major centre for human origins research. For over a century, archaeological excavations in the Levant have produced human fossils and stone tool assemblages that reveal landscapes inhabited by both Neanderthals and Homo sapiens, making this region a potential mixing ground between populations. Distinguishing these populations by stone tool assemblages alone is difficult, but one technology, the distinct Nubian Levallois method, is argued to have been produced only by Homo sapiens.

In a new study published in Scientific Reports, researchers from the Max Planck Institute for the Science of Human History teamed up with international partners to re-examine the fossil and archaeological record of Shukbah Cave. Their findings extend the southernmost known range of Neanderthals and suggest that our now-extinct relatives made use of a technology previously argued to be a trademark of modern humans. This study marks the first time the lone human tooth from the site has been studied in detail, in combination with a major comparative study examining the stone tool assemblage.

An international team of researchers, led by Johannes Krause and Choongwon Jeong from the Max Planck Institute for the Science of Human History (Jena, Germany), and Abdeljalil Bouzouggar from the Institut National des Sciences de l’Archéologie et du Patrimoine (Rabat, Morocco) and including scientists from the Mohammed V University in Rabat, the Natural History Museum in London, University of Oxford, Université Mohammed Premier in Oujda and the Max Planck Institute for Evolutionary Anthropology in Leipzig, have sequenced DNA from individuals from Morocco dating to approximately 15,000 years ago, as published in Science. This is the oldest nuclear DNA from Africa ever successfully analyzed. The individuals, dating to the Late Stone Age, had a genetic heritage that was in part similar to Near Eastern populations and in part related to sub-Saharan African populations.

North Africa is an important area in the history of the evolution of our species. The geography of North Africa also makes it an interesting area for studying how humans expanded out of Africa. It is part of the African continent, but the Sahara desert presents a substantial barrier to travel to and from southern regions. Similarly, it is part of the Mediterranean region, but in the past the sea could have presented a barrier to interaction with others as well. “A better understanding of the history of North Africa is critical to understanding the history of our species,” explains co-author Saaïd Amzazi of Mohammed V University in Rabat, Morocco.

In order to address this, the team looked at a burial site in Grotte des Pigeons, near Taforalt in

Why Modi is between Ambani and us