In August 2019, thousands of refugees, prisoners, and families of ISIS fighters crowded into an encampment in the border town of Baghuz in eastern Syria, one of the last territories controlled by the so-called Islamic State. The United States, supported on the ground by an allied Kurdish and Arab militia, launched a massive air assault on the enclave.

As The New York Times reported on November 13, 2021, a U.S. attack jet unleashed its payload on the civilian encampment. “As the smoke cleared,” the article noted, “a few people stumbled away in search of cover. Then, a jet tracking them dropped one 2,000-pound bomb, then another, killing most of the survivors.” At least seventy civilians died.

A Pentagon legal officer reported internally that this was a possible war crime, but, “at nearly every step, the military made moves that concealed the catastrophic strike,” according to the Times. The death toll was downplayed, and reports were delayed, sanitized, and classified.

The U.S-led coalition forces bulldozed the blast site. The office of the Defense Department’s independent inspector general launched an investigation, but the report was

The Pentagon has announced new rules to slow the spread of extremism in the military, one of which will discipline soldiers for liking or resharing white nationalist and other extremist content on social media. The Pentagon announcement comes just two weeks before the first anniversary of the January 6 insurrection, where more than 80 of the 700 individuals charged with the attack had ties to the U.S. military. Director of the Southern Poverty Law Center’s Intelligence Project Susan Corke says these rule changes are welcomed by her organization but don’t go far enough to stop extremism in the armed forces. “It shouldn’t have taken January 6 to rouse us to really address the problem of extremism in the military,” says Corke.

I mean, one, we were pleased to see that Secretary Austin has made this a real priority. Southern Poverty Law Center has been tracking and reporting on extremism in the military since the mid-1980s as part of our work monitoring the activities of domestic hate groups and extremists. And we’ve been alerting the Defense Department since then. So, you know, with Secretary Austin making it a priority — and they did reach out to experts in civil society, civil rights organizations, like ours, academia, veterans’ rights groups, so we did feel like we were consulted in the course of this process. But, you know, it’s important to note, though, that it shouldn’t have taken January 6th to rouse us to really address the problem of extremism in the military. There has been a dangerous and disturbing trend for many years. And it’s not unique to the military, of course. This is a part of a problem in society at large.

And you’re right: We did track that more than 80 of the 700 individuals charged by the Justice Department do have ties to the U.S. military. Most of those are veterans. Some are active-duty personnel. And that came as actually no surprise to us, because for the hate and extremist

U.S. BUDGETARY COSTS The vast economic impact of the U.S. post-9/11 wars goes beyond the Pentagon’s “Overseas Contigency Operations” (War) budget. This chart and the attached paper estimate the more comprehensive budgetary costs of the wars. Posted on September 1, 2021. 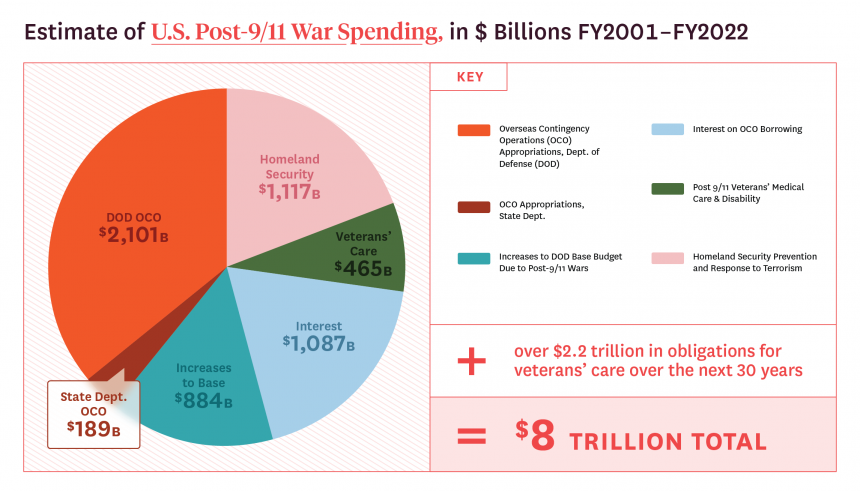 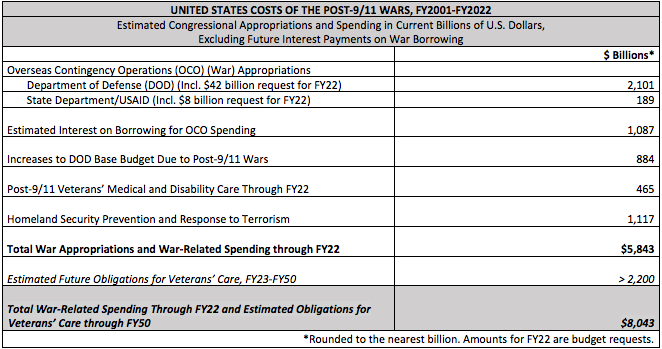 we didn’t want it to end like this, and there should have been better planning in terms of getting people out of the country, but we were very clear we never wanted the U.S. to go in to begin with. And every single year, we kept saying, “Get out.”

It was fascinating listening to Bilal and him talking about all of the corruption inside Afghanistan. And I just kept thinking of this cash cow that has been the War in Afghanistan, that we have been fighting against all these years — we also got dragged out of meetings of shareholder, from Halliburton to General Dynamics — to think of all the companies that profited from this war and how they have been the ones who have kept the war going by putting their money into lobby groups. You just look at General Dynamics, Boeing, Raytheon, and their spending of $34 million in this year alone on lobbying our government.

We have to find a way, Amy, that we reflect on what happened over these 20 years and look at these contractors, that provide all of the logistics and have privatized the U.S. military. In fact, we have

With U.S. President Joe Biden still under fire for proposing a $753 billion national defense budget for the next fiscal year—the bulk of which would go to the Pentagon—a report published Tuesday exposes the “huge sums paid to the CEOs and other top executives of the nation’s five largest weapons contractors” in 2020.

The new Center for International Policy (CIP) issue brief—entitled Executive Excess: CEO Compensation in the Arms Industry, 2020 (pdf)—was authored by William D. Hartung and Leila Riazi, who began by acknowledging the current president’s recent proposal, which has been widely rejected by progressives.

“These enormous sums for the Pentagon are often justified as necessary to meet the needs of military personnel,” Hartung and Riazi note, “but in fact, roughly half of the Pentagon’s budget is spent on corporations like Lockheed Martin, Boeing, General Dynamics, Raytheon Technologies, and Northrop Grumman, as well as the hundreds of thousands of private contractors employed by the department.”

The brief points out that those top five weapons firms received over $150 billion in Pentagon contracts during Fiscal Year 2020—and “not all of these funds are well spent.”

that was the National Security Act of 1947, which created the modern national security establishment, unified the armed forces, created institutions that we’re familiar with, such as the Joint Chiefs of Staff, and created the position of defense secretary. This was under Harry Truman’s administration. Truman himself was acutely sensitive to the importance of maintaining civilian control, and therefore, the creation of this reform, in establishing the position of defense secretary, he was emphatic, the law is explicit, that it will be filled by a civilian.

There have been two exceptions. The first occurred in 1951. This is during the Korean War, great military crisis. General Marshall, George Marshall, became defense secretary. The waiver allowing him to do that was approved. And then, the second time, as you just mentioned, was just recently with the appointment of General Mattis to serve as defense secretary by Donald Trump during the Trump presidency.

just yesterday, I reread General — President, excuse me, President Eisenhower’s famous farewell address. This was the speech where he warned about the influence of the military-industrial complex. And there’s a phrase he uses — he’s addressing his fellow citizens — about the imperative of being watchful over the military to ensure that liberty and security may prosper together.

And as I’ve thought about that, it seems to me that military professionals have a rather specific understanding of what liberty and security mean and what they require, and that we ordinary citizens actually have a different understanding — doesn’t mean that ours is necessarily right. But I think the point is that we need civilian control, in the form of a genuinely civilian defense secretary, for the defense secretary, in a sense, to serve as our agent to try to ensure that the military’s