Facebook allowed a network of fake accounts to artificially inflate the popularity of an MP from India’s ruling Bharatiya Janata party (BJP), for months after being alerted to the problem.

The company was preparing to remove the fake accounts but paused when it found evidence that the politician was probably directly involved in the network, internal documents seen by the Guardian show.

The company’s decision not to take timely action against the network, which it had already determined violated its policies, is just the latest example of Facebook holding the powerful to lower standards than it does regular users.

“It’s not fair to have one justice system for the rich and important and one for everyone else, but that’s essentially the route that Facebook has carved out,” said Sophie Zhang, a former data scientist for Facebook who uncovered the inauthentic network. Zhang has come forward to expose the company’s failure to address how its platform is being used to manipulate political discourse around the world.

Facebook’s failure to act against the MP will also raise questions about Facebook’s relationship with the Hindu nationalist party. Facebook has repeatedly treated rule violations

Nearly 3,400 communal riot cases were registered in the country between 2016 and 2020, Union Minister of State for Home Nityanand Rai said in Lok Sabha on Tuesday.

The minister also said that 2.76 lakh rioting cases were registered in the country during the said period.

government informed the Lok Sabha that there had been a rise in the number of cases registered for crimes against the Scheduled Castes and Scheduled Tribes (SC/STs) from 2018 to 2020.

India’s history, beginning in 1947, is peppered with instances when the Rashtriya Swayamsevak Sangh and its affiliates harnessed religious processions to spawn violence. Their modus operandi: They insist on taking processions through Muslim-dominated areas and chant abusive slogans against Islam and its followers. As the police turn into idle bystanders, Muslims take to pelting stones. At times, it has been difficult to ascertain who chucked stones first. In either case, the fire is lit—and people perish.

Several Commissions of Inquiry have retold this story many times.
Science Po’s Survey

The RSS’ use of religious processions to widen the chasm between Hindus and Muslims can be gleaned from the database on Mass Violence and Resistance prepared by the Paris Institute of Political Studies, popularly known as Sciences Po. The Indian section, written by Violette Graff and Juliette Galonnier, has two parts. Part I deals with communal riots that occurred between 1947 and 1986. Part II analyses the riots between 1986 and 2011.

There are myriad factors behind communal riots. From Science Po’s data, I segregated riots sparked by processions purely religious in nature. Purely religious?

Eighty-five years ago, on March 23, 1931, Shaheed Bhagat Singh and his two comrades-in-arms, Shaheed Rajguru and Shaheed Sukhdev were hanged in Lahore by the British colonial government. At the time of his martyrdom, Bhagat Singh was barely 23 years old. Despite the fact that he had his whole life ahead of him, he refused to seek clemency from the British as some well-wishers and family members wanted him to do. In his last petition and testament, he demanded that the British be true to the charge they laid against him of waging war against the colonial state and that he be executed by firing squad and not by hanging. The document also lays out his vision for an India whose working people are free from exploitation by either British or Indian “parasites”.

At a time when the Bharatiya Janata Party national executive has decided to make nationalism its rallying cry, it is useful to compare the patriotic attitude and vision of Bhagat Singh with that of the Sangh parivar’s icon, V.D. Savarkar, author and originator of the concept of ‘Hindutva’, which the BJP swears by.

Sent to the notorious Cellular Jail in the Andamans in 1911 for his revolutionary activity, Savarkar first petitioned the British for early release within months of beginning his 50 year sentence. Then again in 1913 and several times till he was finally transferred to a mainland prison in 1921 before his final release in 1924. The burden of his petitions:

Facebook’s algorithm grossly favours Bharatiya Janata Party’s (BJP) advertisements because of the divisive nature of the content, as revealed by part four of a year-long investigation conducted by Kumar Sambhav of The Reporters’ Collective (TRC) and Nayantara Ranganathan of ad.watch, a research project that studies political ads on social media.

The first three parts of the investigation focused on how Facebook helps BJP in the digital space by promoting advertisements from its surrogates. The first part of the investigation found that Facebook carried 718 surrogate political ads of Reliance Jio-funded New Emerging World of Journalism Limited promoting the BJP and denigrating its rivals costing Rs 52,00,000 viewed more than 290 million times in those 22 months.

The second part of the investigation discovered that at least 23 ghost and surrogate advertisers paid more than Rs 5.8 crore to Facebook to run 34,884 ads either to promote

In a huge and unfair advantage to the Narendra Modi-led Bharatiya Janata Party (BJP) government, Mark Zuckerberg’s Facebook promoted the party’s advertisements at 29% less price than the amount paid by its arch-rival Congress during 10 elections between February 2019 and November 2020 (22 months), allowing it to reach a wider audience than opposition parties.

Part three of a year-long investigation conducted by Kumar Sambhav of The Reporters’ Collective (TRC) and Nayantara Ranganathan of ad.watch, a research project that studies political ads on social media, and published by Al Jazeera has revealed that Facebook showed a BJP ad on average one million times but charged only Rs 41, 844 from the party, its candidates and affiliated organisations.

On the other hand, the report discovered that the social media giant charged the Congress, its candidates and affiliated organisations Rs 53,776 on average to show one ad for the same number of times.

An incident on December 3, 2018, made national headlines, in which 54-year-old police inspector Subodh Kumar Singh was allegedly lynched by a mob led by a Hindu Right-wing group who had gone on a rampage after a cow carcass was found in a sugarcane field near Mahav village in Siyana, Bulandshahr district.

Three years later, the court of the Additional District and Sessions Judge has allowed the police to book all 36 accused under Section 124A (sedition) of the Indian Penal Code (IPC) in the incident, including the key accused, Yogesh Raj, a Bajrang Dal member who allegedly incited the mob for violence.

Additional sessions judge (ADJ) Vineeta Vimal, in her order, said, “It has been confirmed from the police investigation that the accused were part of an unruly mob with weapons. They arrived at the spot with an aim to disturb the peace. The court allows Section 124-A (sedition) in the charge sheet, and trial will take place accordingly.”

The orders were shared with all the accused who pleaded ‘not guilty’. 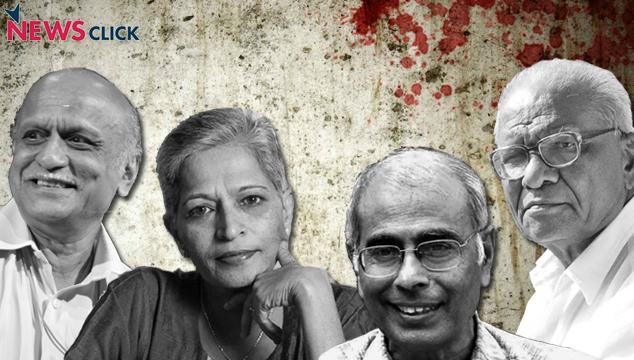 Seven years ago, on 16 February 2015, the veteran communist leader, rationalist thinker, senior labour lawyer, and prolific writer Govind Pansare was shot at close range outside his house. On 20 February, he succumbed to his injuries. We lost a rare person.

Maharashtra has a rich legacy of egalitarian saints and social reform movements as well as the legacy of warrior-king Shivaji. But at the same time, Maharashtra is one of the places that is the origin of the radical Hindutva ideology, represented by the Rashtriya Swayamsevak Sangh. In the 1990s, the state was led in dangerous direction. The demolition of the Babri Masjid in 1992 and the communal riots that followed in different parts of the state polarised our minds in a communal way, shaking the secular mindset of Maharashtra.

At that time, Comrade Pansare started openly speaking about the simultaneous impact of the forces of neoliberalism and religious fundamentalism. He promoted progressive, secular,

In the biggest bank fraud in the past 75 years, totalling Rs 22,842 crore in India, public sector State Bank of India (SBI) has refuted allegations of delay in filing the complaint against Gujarat-based ABG Shipyard with the Central Bureau of Investigation (CBI).

The CBI had filed a case against ABG Shipyard, the flagship company of the ABG Group which builds and repairs ships in Dahej and Surat, and its directors Rishi Agarwal, Santhanam Muthuswamy and Ashwini Kumar on Saturday for allegedly defrauding 28 banks of Rs 22,842 crore.

In a statement issued on Sunday, SBI said that it had filed a complaint against ABG Shipyard with the CBI way back on November 8, 2019. on March 12, 2020, the bank filed a second complaint in August that year. According to the CBI, the agency acted on the complaint after “scrutinising” it for more than one-and-a-half years by filing an FIR on February 7. SBI issued the statement after All India Congress Committee general secretary Randeep Surjewala accused the Narendra Modi government of running a “loot and escape” flagship scheme for bank fraudsters.

SBI said that after the company was “financed under consortium arrangement with over two dozen lenders led by ICICI Bank”, the “account became a non-performing asset (NPA) in November 2013 due to poor performance”. As per the country’s largest public-sector lender, the “account was classified as NPA in July 2016 with effect from November 2013” as restructuring failed.

On December 23, 2021, Harish Ramkali, a member of the Bajrang Dal in Haryana, posted on Facebook that any school that dresses its students as Santa Claus without prior permission from parents would have a case filed against them and be closed.

This was one of the several threats that Ramkali had made on his Facebook page in the lead up to Christmas last year that saw a spate of violence against the minority Christian community.

On December 12, Ramkali uploaded a video where he could be seen mobilising people against a Christian pastor whom he accused of religious conversion in Haryana. “The Valmiki community of Jind is standing up against them (the Christian community),” Ramkali could be heard saying amid chants hailing the Valmiki god and slogans of ‘Jai Shri Ram’ and ‘Bharat Mata ki Jai’.

Harish Ramkali, aka Harish Saini, is a resident of Jind, Haryana and a leader of the Bajrang Dal. Starting out as a district president of Akhil Bharatiya Vidyarthi Parishad