The production of blue jeans, one of the most popular apparel items ever, has for decades left behind a trail of heavy consumption, diminishing Earth’s water and energy resources, causing pollution, and contributing to climate change. The harm done by the fashion industry has intensified, not diminished, in recent years.
The making of jeans is water intensive, yet much of the world’s cotton crop is grown in semiarid regions requiring irrigation and pesticide use. As climate change intensifies, irrigation-dependent cotton cultivation and ecological catastrophe are on a collision course, with the Aral Sea’s ecological death a prime example and warning.
While some major fashion companies have made sustainability pledges, and taken some steps to produce greener blue jeans, the industry has yet to make significant strides toward sustainability, with organic cotton, for example, still only 1% of the business.
A few fashion companies are changing their operations to be more sustainable and investing in technology to reduce the socioenvironmental impacts of jeans production. But much more remains to be done.

Eternally current and always fashionable, blue jeans are among the most-worn articles of clothing on Earth, transcending time, trends, and social class. Their popularity is ubiquitous, so much so that legendary designer Yves Saint Laurent once declared: “I wish I had invented blue jeans. The most spectacular, practical, relaxed and nonchalant.

More than 1,700 murders of environmental activists were recorded over the past decade, an average of a killing nearly every two days, according to a new report.

Killed by hitmen, organised crime groups and their own governments, at least 1,733 land and environmental defenders were murdered between 2012 and 2021, figures from Global Witness show, with Brazil, Colombia, the Philippines, Mexico and Honduras the deadliest countries.

The NGO has published its report on the killings of land and environmental defenders around the world every year since 2012, after the murder of Chut Wutty, a Cambodian environmentalist who worked with the Global Witness CEO Mike Davis investigating illegal logging. Killings hit a record of 227 in 2020 despite the pandemic.

“Wutty prompted us to confront a range of questions. What was the global picture, what were the implications of such attacks and what could be done to prevent them?” wrote Davis in the report.

Much of the excitement over the Inflation Reduction Act, which became law this summer, focused on the boost it should give to the sales of electric vehicles. Sadly, though, manufacturing and driving tens of millions of individual electric passenger cars won’t get us far enough down the road to ending greenhouse-gas emissions and stanching the overheating of this planet. Worse yet, the coming global race to electrify the personal vehicle is likely to exacerbate ecological degradation, geopolitical tensions, and military conflict.

The batteries that power electric vehicles are likely to be the source of much international competition and the heart of the problem lies in two of the metallic elements used to make their electrodes: cobalt and lithium. Most deposits of those metals lie outside the borders of the United States and will leave manufacturers here (and elsewhere) relying heavily on foreign supplies to electrify road travel on the scale now being envisioned.

In the battery business, the Democratic Republic of Congo is referred to as “the Saudi Arabia of cobalt.” For two decades, its cobalt — 80% of the world’s known reserves — has

One-third of Pakistan is under water. Record heat waves blanket the globe driving up temperatures beyond what humans can survive. Polar glaciers are melting much faster than scientists predicted. Droughts, fires and floods are ravaging the planet, forcing the displacement of tens of millions of people. And this is just the beginning.

It’s time to tell the truth. We can’t afford to wait any longer. We can’t afford to pretend that the same political-economic system that has caused the most historic levels of ecological destruction in human history is the same system that is going to fix it. Here, in the United States— the country most responsible for the highest levels of carbon emissions in Earth’s atmosphere— we have a very difficult task in front of us. We have to tell the truth about the Earth’s thresholds, about the laws of physics, and about what’s causing our ecosystems to collapse, if we are to have any chance of a habitable future for ourselves, our children and grandchildren. We have to tell the truth, if we have any hope of human civilization at all.

But in telling this truth, we are faced with a terrible political reality that few are willing to admit. Many of us understand the science. We know that Earth’s ability to host humans depends on a very delicate balance of physical and ecological conditions that have only been present for a short time during the Earth’s lifespan. The Earth has been around for billions of years, but modern humans, as we know them, have only been here for some 200,000. Humanity is just a blip in our planet’s lifetime. The ecosystems that support human life are now in free-fall in terms of planetary time. We’re in the middle of the Sixth Mass Extinction, but this time, it’s because of human activity, fossil fuel

At the end of July, the International Monetary Fund warned of a “gloomy outlook” for the world economy. It was doing so not because of a spike in poverty, a widening of inequality, or a surge in carbon emissions. Quite the contrary: the IMF was making its pessimistic assessment because it was revising down its forecast for global GDP growth for 2022 from 3.6 percent to 3.2 percent. In other words, the global economy was growing, but not enough, and that for the IMF was cause for concern.

At the same time that the IMF was making its announcement, the U.S. government was trying to dispel concerns that a second successive quarter of economic contraction—a decline of .9 percent that followed a 1.6 percent decrease in the first quarter of 2022—meant that the country was on the verge of a recession. The U.S. economy was not growing, and that for the government was cause for even greater concern.

Economic expansion remains the yardstick of success at the global and national levels. Robust growth garners positive headlines; anemic growth and contraction generate anxious forecasts. This remains the case despite the widely acknowledged link between economic growth and the climate crisis, a connection reinforced during the COVID pandemic when

On October 1st, the U.S. military will start spending the more than $800 billion Congress is going to provide it with in fiscal year 2023. And that whopping sum will just be the beginning. According to the calculations of Pentagon expert William Hartung, funding for various intelligence agencies, the Department of Homeland Security, and work on nuclear weaponry at the Energy Department will add another $600 billion to what you, the American taxpayer, will be spending on national security.

That $1.4 trillion for a single year dwarfs Congress’s one-time provision of approximately $300 billion under the recently passed Inflation Reduction Act (IRA) for what’s called “climate mitigation and adaptation.” And mind you, that sum is to be spent over a number of years. In contrast to the IRA, which was largely a climate bill (even if hardly the best version of one), this country’s military spending bills are distinctly anti-human, anti-climate, and anti-Earth. And count on this: Congress’s military appropriations will, in all too many ways, cancel out the benefits of its new climate spending.

Here are just the three most obvious ways our military is an enemy of climate mitigation. First, it produces huge quantities of greenhouse gases, while wreaking other kinds of ecological havoc. Second, when the Pentagon does take climate change seriously, its attention is almost never focused on reducing greenhouse gas emissions but on preparing militarily for a climate-changed world, including the coming crisis of migration and future climate-induced armed conflicts globally. And third, our war machine wastes hundreds

When President Biden signed the $1.2 trillion Bipartisan Infrastructure Package into law last November, many saw it as an opportunity to combat climate change.

The bill could slash emissions from transportation, which is responsible for 27 percent of all U.S. climate pollution. With some $600 billion in new funding for the sector, the Biden administration encouraged state leaders to build out public transit systems and expand “non-motorized” transportation infrastructure, like bike lanes. One analysis from the Georgetown Climate Center estimated that these actions could reduce transportation emissions by 14 million tons per year by 2032 — about as much as the annual emissions from 4.5 million passenger vehicles.

However, some policymakers are flouting that advice.

According to a new report from the nonprofit U.S. Public Interest Research Group, or PIRG, state and local governments are at risk of squandering federal funds to build or expand

The day, hosted and calculated by Global Footprint Network, an international research organisation, falls earlier every year, to indicate that humanity’s demand for natural resources exceeds what the Earth can provide.

Moving the date of exhaustion communicates to the world that the time to act and save the planet is running out. 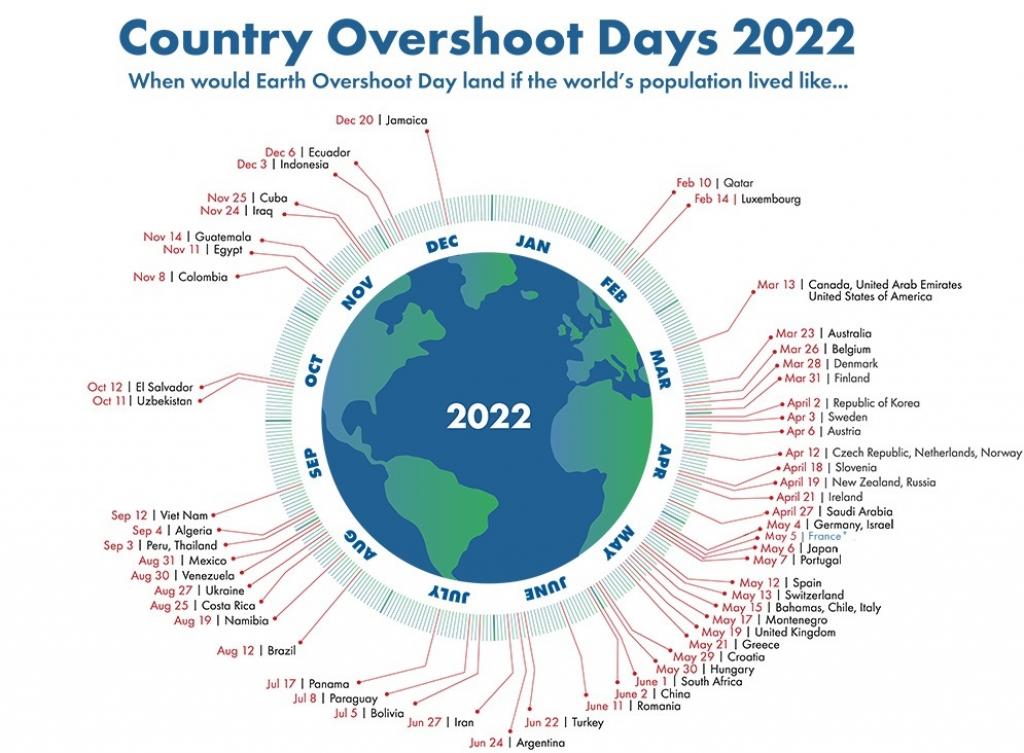 In a blow to climate activism, the Supreme Court on Thursday severely limited the Environmental Protection Agency’s ability to place emission caps on power plants. In the case, West Virginia v. EPA, several states led by West Virginia and fossil fuel companies fought against the regulations imposed by the Obama administration under the Clean Air Act. The 6-3 ruling by the court’s conservative justices ultimately weakens the federal agency’s authority to limit carbon emissions and combat the worst effects of the climate crisis. We look at the decision’s impact on vulnerable communities, particularly lower-income, Black and Brown residents who live close to coal-fired power plants, as well as the climate emergency more broadly. “They’ve put people’s lives in danger, and they have also put in place steps that will accelerate the climate crisis,” says Mustafa Ali, formerly head of the environmental justice program at the Environmental Protection Agency

It makes it so much more difficult to be able to achieve the goals that the IPCC and the National Climate Assessment has shared with us. You know, domestically in our country, just to actually anchor folks in some facts, we’ve got between 200,000 and 300,000 people who die prematurely from air pollution. And a part of it also comes from coal-fired power plants. So, we know that not only were we trying to make sure that we are lowering the emissions that are coming out of there, the carbon emissions, but you also