On 23 December, Raed Qaadan went to harvest his strawberry crops.

The 47-year-old’s land is in the town of Beit Lahia in the northern Gaza Strip and adjacent to the barrier separating Gaza and Israel.

At some point, he and his oldest son, Sameeh, 22, noticed Israeli soldiers in three bulldozers heading toward their lands. They didn’t imagine they would destroy their agricultural land.

“We were shocked when they approached and started bulldozing the lands. We tried to stop them by holding up white flags, but they didn’t,” Qaadan told The Electronic Intifada.

They also, he said, took their time, digging, leveling and flattening.

The panel is part of Visible Work, Invisible Women, a photo exhibition depicting the great range of work done by rural women. All the photographs were shot by P. Sainath across 10 Indian states between 1993 and 2002. Here, PARI has creatively digitised the original physical exhibition that toured most of the country for several years.

She paused, exasperated by the midday sun in Vizianagaram. But remained bent over. She knew she would resume work in moments – in that very posture.

Working in the same cashew fields were two other groups of women from her village. One group had carried its lunch and water two kilometres to the field. The other worked from the reverse direction. All were bent over.

In Rayagada in Odisha, there were also men in the field. Through the lens, it was more spectacular. All the men were standing. All the women, bending. In Nuapada in Odisha, the rain did not stop the woman from weeding. She worked on, bent from the waist. Under an umbrella. 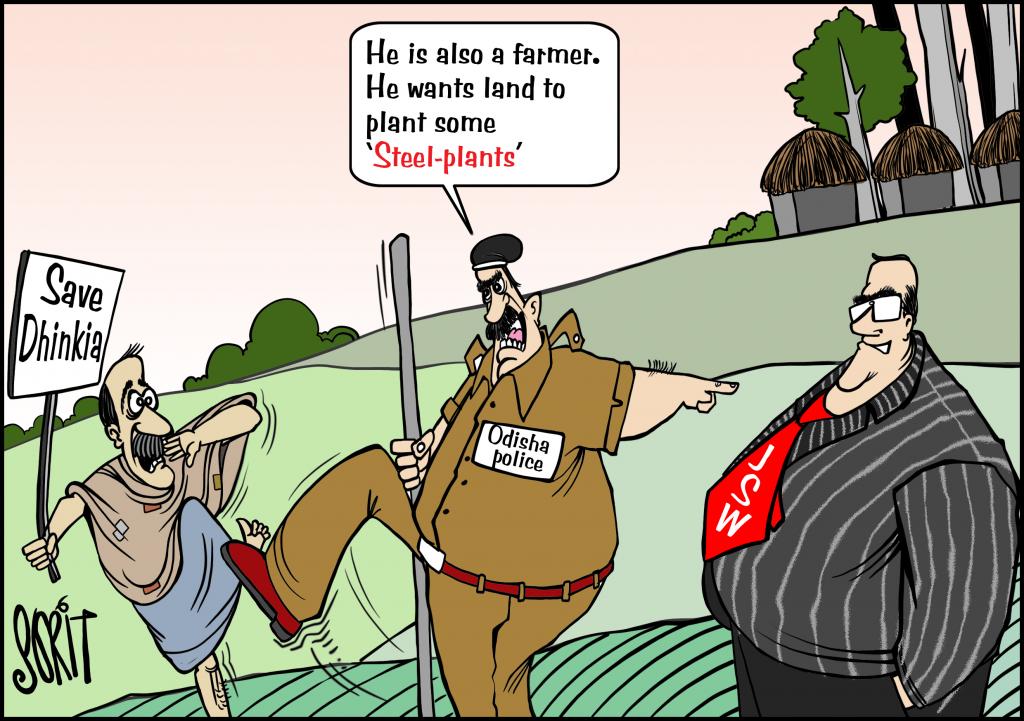 The bill to repeal the three contentious farm laws was passed by the Lok Sabha and Rajya Sabha without any discussion November 29, the first day of the Winter Session of Parliament. The Farm Laws Repeal Bill, 2021, was introduced at 12.09 pm in the Lok Sabha and passed by 12:13 pm, even as the Opposition demanded a discussion. The Bill was passed in the Rajya Sabha after a brief discussion. The laws were repealed faster than they were passed. There was uproar in the House, which served as a reminder of the day the bills were passed without any proper discussion in September 2020. The three farm laws were: Farmers (Empowerment and Protection) Agreement on Price Assurance and Farm Services Act, 2020; the Farmers’ Produce Trade and Commerce (Promotion and Facilitation) Act, 2020; the Essential Commodities (Amendment) Act, 2020. The House was adjourned till 2 pm, amid uproar by the Opposition, which demanded a discussion on the statutory guarantee to the minimum support price (MSP), one of the key demands of the protesting farmers.

On 29 October 1944, Mahatma Gandhi presciently told the peasant leader NG Ranga, “If the legislature proves itself to be incapable of safeguarding kisans’ interests they will of course always have the sovereign remedy of civil disobedience and non-cooperation.” The year-long agitation of farmers against the three farm laws captured this vision of Gandhi and the spirit of his first Satyagraha in Champaran. He launched this Satyagraha in 1917 to free the farmers of Bihar from exploitation by British planters, who would force them to plant indigo in vast swathes of fertile land. Eventually, the Satyagraha succeeded and the Champaran Agrarian Act of 1918 stopped forcible indigo plantation.

The Champaran Satyagraha began with Gandhi breaking the law and ended with the British regime enacting a law to end the exploitation of farmers. He pleaded guilty before the magistrate and submitted to the penalty of disobedience. He disarmed the colonial rulers with truthful articulation and the courage to accept the punishment for actions that violated the law. In his own words, Gandhi believed he was acting “…in obedience of the higher law of our being—the voice of conscience”.

The government dropped charges against Gandhi and allowed him to investigate the cause of the suffering of the victims of exploitation in the colonial era. He deliberated and consulted with farmers, British officials and the exploitative planters to unearth the truth in a report outlining why farmers lived in a pitiable condition. Based on that report, the British regime established a committee that included Gandhi as a member.

That committee submitted another report, after which the British authorities framed the Champaran Agrarian Bill. It was sent for scrutiny to the Select Committee of the Bihar-

Latest data on procurement shows that during the Modi years, there has been hardly any increase in the procurement of food grains. While wheat and rice procurement by the government has increased marginally from about 32-33% to 36-37% of the production of these two staples, coarse grains, pulses and oilseeds remain out of the ambit of any serious procurement. This directly means that the announcement of MSPs for these categories of food grains remains a paper exercise and farmers are forced to sell the produce at unremunerative prices.

Let us start with wheat and rice, the two main cereals grown and consumed in the country. Production data from the ministry of agriculture when compared to the procurement data as revealed by the department of food and public distribution shows that in 2020-21, about 37% of rice and 36% of wheat was procured by the government. [See graph below] This was a small increase from 33% rice and 32% wheat procurement in 2015-16. As is well known, the bulk of this procurement happens in Punjab and Haryana, and in recent years, from Madhya Pradesh too.

Most farmers in Uttar Pradesh, Bihar and elsewhere thus do not get their wheat or rice procured by the government. Hence, they do not get minimum support prices too.

The picture is even more dire in the case of other food grains. In 2020-21, an abysmal 9% of pulses were produced, and just 1.4% of coarse grains were procured by the government.

What the media can never openly admit is that the largest peaceful democratic protest the world has seen in years – certainly the greatest organised at the height of the pandemic – has won a mighty victory.

A victory that carries forward a legacy. Farmers of all kinds, men and women – including from Adivasi and Dalit communities – played a crucial role in this country’s struggle for freedom. And in the 75th year of our Independence, the farmers at Delhi’s gates reiterated the spirit of that great struggle.

Prime Minister Modi has announced he is backing off and repealing the farm laws in the upcoming winter session of Parliament starting on the 29th of this month. He says he is doing so after failing to persuade ‘a section of farmers despite best efforts’. Just a section, mind you, that he could not convince to accept that the three discredited farm laws were really good for them. Not a word on, or for, the over 600 farmers who have died in the course of this historic struggle. His failure, he makes it clear, is only in his skills of persuasion, in not getting that ‘section of farmers’ to see the light. No failure attaches to the laws themselves or to how his government rammed them through right in the middle of a pandemic.

Well, the Khalistanis, anti-nationals, bogus activists masquerading as farmers, have graduated to being ‘a section of farmers’ who declined to be persuaded by Mr. Modi’s chilling charms. Refused to be persuaded? What was the manner and method of persuasion? By denying them entry to the capital city to explain their grievances? By blocking them with